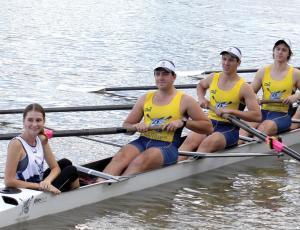 Henley Regatta was first held in 1839 and has been held annually ever since, except during the two World Wars. Originally staged by the Mayor and people of Henley as a public attraction with a fair and other amusements, the emphasis rapidly changed so that competitive amateur rowing became its main purpose.

The 1839 Regatta took place on a single afternoon but proved so popular with oarsmen that the racing lasted for two days from 1840. In 1886 the Regatta was extended to three days and to four in 1906. Since 1928 its increased popularity meant entries exceeded the permitted numbers in several events, and so Qualifying Races are now held in the week before the Regatta to reduce the number of entries to the permitted maximum. In 1986 the Regatta was extended to five days, with an increase in the maximum entry for certain events. For the first time in 2015 the Regatta was streamed live on YouTube.

Why Henley for King’s?

King’s has a very proud history of rowing at the University level. In fact, the College has only lost the ICC Regatta once in the last 15 years.

The VIII has won 54 of 60 races held in the last 15 years at the Inter College level at UQ. Quite deliberately and to provide Kingsmen with better opportunities to row and to be present on the world stage, the College nominated the VIII to compete at the Henley Royal Regatta in 2015, in the Temple Challenge Cup.

The College will again proudly compete this year as well as in lead up regattas in Marlow, Reading Town and Thames Valley Park.

As part of the search to find the right formula for the eights events at the Regatta an additional event was instituted in 1990 for the eights of single colleges, of smaller university boat clubs and of schools unable to enter for the Princess Elizabeth Challenge Cup by reason of age. This proved to be a very popular event. The Stewards quickly decided that it should become a permanent part of the Regatta programme and provided a trophy, THE TEMPLE CHALLENGE CUP. The cup, made in 1835 by Charles Fox, has been engraved with a sketch of the Temple.

NOTE:All races are held over the full Henley Course on the River Thames. The length of the Course is one mile 550 yards (2,112 metres) – upstream.

All races are rowed two abreast and the winner proceeds to the next round. The Regatta is raced over five days. The first rounds of the Thames, Temple, Princess Elizabeth, Wyfold, Prince Albert and Fawley Challenge Cups will begin racing on the first day of competition